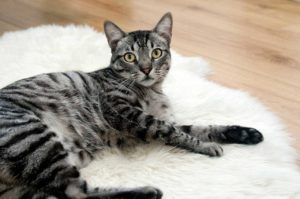 Recent studies provide evidence that children who are exposed to animals from birth are less likely to develop allergies. This runs contrary to the long-held belief that exposure to animals increases the risk of becoming sensitive to them. Although many newspapers and popular press have eagerly jumped on the “pets can protect” story, the issue is far from clear.

“There is a controversy out there,” says Marianne Frieri, MD, PhD, a professor of medicine at the State University of New York at Stony Brook and a fellow of the American Academy of Allergy, Asthma, and Immunology.

In the late 1990s, a handful of studies reported an inverse relationship between cat or dog exposure and allergic disease in humans. Although those reports did not receive much attention, a number of other studies supporting this inverse relationship have been published in the past few years and brought the issue into the spotlight.

One study, published in the Journal of the American Medical Association in August 2002, followed 474 children in suburban Detroit from birth until the ages of 6 or 7. It revealed that exposure to cats or dogs during the first year of life lowered the risk of allergies to pets. In addition, children who had two or more dogs and cats had a lower risk of allergies, not only to the animals, but to seven common allergens, including dust mites, bluegrass, and ragweed.

Another study, published in the October 2003 issue of the Journal of Allergy and Clinical Immunology, followed 2,454 children in Sweden for four years from the age of 7 or 8. Despite cats being the most common allergen of sensitization, owning a cat or dog was not related to an increased risk of developing the sneezing, itching, and swelling that affect many people. In addition, children who continuously owned cats or dogs had a lower incidence of developing allergies to the animals, compared with new pet owners and those who had been only exposed earlier in life. Among the children allergic to cats, 80 percent had never had a feline friend at home.

Those are just a couple of the recently published studies, but what exactly do they mean? Dr. Frieri, who is also director of Nassau University Medical Center’s Allergy and Immunology Division, says that the recent reports have prompted some parents to believe that purchasing pets will protect their children from allergy and asthma, and this is worrisome to her.

“There are a growing number of doctors that believe that this is premature,” Dr. Frieri said. “The risk of a child developing any form of allergy appears to depend on many factors, including their genetic constitution.” She says that allergic disease and allergy-related asthma are complex diseases and should be treated as such. Cats, dogs, dust mites, mice, and cockroaches are just a few of the things that can cause allergies that trigger the wheezing and constricted airways of asthma, and sometimes those triggers work together. Asthma is a more substantial condition, with a great possibility for severe outcomes. “There needs to be caution that this protective effect might not extend to asthma,” Dr. Frieri said.

A prospective birth cohort study from Boston evaluated 448 children to the age of 5 and found that, among children whose mothers had a history of asthma, exposure to a cat increased the risk of wheezing with age. The study, published in the Lancet in 2002, also found that the father’s history of asthma had no impact.

Leonard Bacharier, MD, is an assistant professor of pediatrics at Washington University School of Medicine in St. Louis. Dr. Bacharier points out that studies showing a protective effect from pets are done in different populations with different risk factors for symptoms and disease.

The widely cited JAMA article involved a suburb of Detroit and a cohort of Caucasians. “What does that mean for (inner city kids) or a bunch of African-American children? What happens in a population where cockroach exposure is substantial? Does the same finding hold true?” Dr. Bacharier questioned. “The answer is, we don’t know.”

Dr. Bacharier says that, given current data, a pediatrician should not recommend limiting a young child’s exposure to a pet, as was sometimes recommended. Parents with asthma, however, should not be encouraged to acquire cats or dogs before a child is born, purely in an attempt to prevent future allergic disease. Asthma is more severe among pet-sensitized owners, and parents or their other children may be sensitive and have more illness because of pets.

“The data there are pretty clear. Ongoing exposure to a pet, to which you are known to be allergic, makes allergy and asthma worse,” Dr. Bacharier said. In addition, although the presence of pets seems to be associated with fewer allergies, it is not completely effective—some children who are exposed to pets early in life go on to develop allergies and asthma.

Dennis Ownby, MD, head of allergy and immunology at the Medical College of Georgia, points out, in a December 2003 review article in the journal Current Opinion in Allergy and Clinical Immunology, that a common question addressed in new studies is whether allergic parents are less likely to keep pets in their homes. If so, and if a parent’s allergy is a strong determinant of allergies in children, then it could be that children exposed to pets are less likely to be allergic, because of their nonallergic parents—not because of early pet exposure. Some studies reveal that parents with asthma or pet or pollen allergy are less likely to keep cats than families who don’t have these problems.

After reviewing recent literature, Dr. Ownby agrees with other doctors that it is too soon to draw conclusions. The development of allergies depends on many factors, including a child’s genes, early environmental exposure to allergens and other agents that interact with the immune system, the mother’s immune status, and allergen exposure later in life.

Further complicating the issue is the hygiene hypothesis, which some blame for the increase of all allergic diseases. This theory argues that, because of our increasingly hygienic society, our immune systems are not exposed to enough microbes early in life, and thus, start overreacting to harmless stimuli. A growing body of evidence supports this theory. Most recently, a study in the February 2004 issue of the Journal of Allergy and Clinical Immunology revealed that children with fevers of at least 101 F before the age of 1 year were less likely to demonstrate allergic sensitivity when they reached 6 or 7.

Studies of individuals who live on farms also provide support for the hygiene hypothesis. “There is evidence from largely European studies that show that children who grow up on farms with (livestock) have lower rates of asthma and allergies,” Dr. Bacharier said. Growing up around farm animals, he explained, children are exposed to more bacteria. Their immune systems are occupied with other activities and don’t have time to become sensitized to things such as cat dander.

“One cat makes plenty of dander. So, why you would need two cats to see an effect is unclear, unless it has to do with the bacteria or bacterial products that the pets bring with them,” Dr. Bacharier said.

A study in the February 2004 issue of JACI provides support for this line of reasoning. The investigators found that infants with certain forms of a gene that is a marker for immune function, who also have a dog, are much less likely to develop allergic skin rashes.

At press time, the American Academy of Allergy, Asthma, and Immunology had yet to take a formal stance on this complex issue. Any further studies investigating determinants of allergies will take time, since children must be followed from birth to at least age 6. “I am unaware of any studies that are ongoing now that are going to make the point crystal clear,” Dr. Bacharier said. Unfortunately for now, the issue will remain murky.