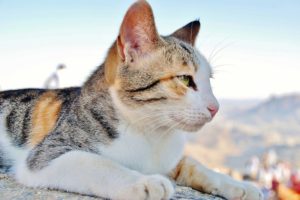 If you have been around enough cats, you may have started to notice that cats of certain colors act the same way. Many people see calicos as more stand-offish or feisty than the typical grey tabby, for example. But is there any basis for this, or is just coincidence? Science says there may indeed be a connection between your cat’s coat color and her personality. A University of California Davis veterinarian research team conducted a study to see if a cat’s personality is linked, in part, to its coat color.

Particularly, they were looking for a link between coat and “aggressive behaviors in the domestic cat,” according to the team’s abstract.

This is not new science. Researchers have long been interested in nonhuman mammal coats and their link to personality. Consider the silver fox experiments by Belaev. When selectively bred for tame behavior, the changes in personality leading to a tamer fox were also accompanied by a change in coat color, as well as other physical changes including tail and ear shape. Clearly, the temperament traits were linked to physical characteristics somehow. (cbsu.tc.cornell.edu)

According to the UC Davis research, cat coat-color pattern genes fall into four categories “that dictate the amount of white (“spotting”); the intensity of pigment (“dilution”); the orange and agouti pelage (“pigment-type switching”); and the patterns of ticked, tabby, and spotted (“pattern”). Orange is of particular interest, as it is carried on the X chromosome, along with its “opposite” allele, black. Some females display an orange-black pattern determined by random X inactivation, leading to tortoiseshell, torbie (tortoiseshell tabbies, “striped torties”), and calico mosaic patterns. Males can display these patterns only by virtue of being XXY, making them extremely rare. Calicos express the white gene as well.”

The research was conducted via internet survey, which more than 1,200 cat owners filled out. The 20-minute survey “was designed to mask the fact that coat color was the primary exposure of interest to avoid bias on the part of the responder; instead, survey takers were told that the purpose of the study was to collect information about cat behavior.”

Questions including information about cat and guardian demographics, frequency cat reacted aggressively to people and other cats, likelihood cat would act aggressive in given circumstances/stimuli, and whether the cat had other specific behavior problems.

The study showed, in general, that there was not enough difference between the sexes when it came to aggression toward humans, so the results were pooled solely based on color, except where indicated.

They found that: “that increased aggression toward humans may exist among sex-linked females, gray-and-white cats, and possibly black-and-white cats compared with cats of other colors. The finding that tortoiseshell/calico/torbie cats were significantly more frequently aggressive toward humans supports the contention that calicos and tortoiseshells can be challenging for some guardians.”

While the team expected to find sex-linked orange female cats (the calicos, torties, torbies, etc.) to be more aggressive based on anecdotal evidence from owners as well as vets and shelter workers, they were surprised at the finding regarding black and white and gray and white cats, as there is no literature suggestion aggression in these coat colors.

Of course, this was a small study, compared to the number of cat owners in just the United States alone, not to mention the world. In addition, since the researchers had to rely on the guardians responses to how their cat behaves, there is room for error when it comes to interpreting cat body language. The researchers noted too that “the respondents to the survey were self-selected from a population of cat guardians who had access to the specific listservs and social media profiles that made the survey link available. Exposure to the link and willingness to participate likely skew the data in favor of guardians very interested in cats in general and, in particular, their cats.”

So what do you think? Have you noticed a difference in the ‘tude of your tortie, black and white or gray and white cat compared to your tabby? Share your opinion the comments!

Your Cat’s Coat Color May Be Linked To His Personality
https://iheartcats.com/you-cats-coat-color-may-be-linked-to-his-personality/